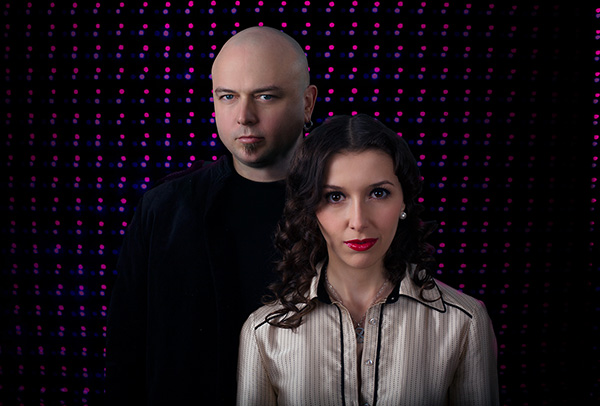 Alchemical Disco is Brooklyn-based DJ and production duo Ayesha Adamo and Lucius von Wahnfried. As conspiracy theorists have confirmed, Ayesha Adamo initially came to earth in a Winnebago that landed in the vicinity of what is now the Denver International Airport. Little is known of her childhood.

While still a teenager, Ayesha hitchhiked from the Jersey Shore to New York City and found work as a club dancer at the legendary superclub, Twilo. Her scantily clad outfits sometimes revealed her Nexus-6 serial number, but everyone just thought it was a cool tattoo.

Having been voted “Most Likely To Be Immortalized As An Anime Character” in high school, it was no surprise that Ayesha ultimately left Twilo to realize her future as a Taiwanese popstar in the girl band Beauty4. After releasing their debut album on EMI records, the group toured throughout Asia.

But Ayesha’s promising singing career was put on hold when she accidentally swallowed sparks from an on-stage pyrotechnics display in Hong Kong and was told by physicians that she might never sing again.

Ayesha had no choice but to become a DJ. Her super-human genetics ensured that she had no trouble lifting twice her weight in vinyl, and she soon found herself releasing her first DJ mix boxed set on High Note Records Taiwan. Ayesha continues to dominate the decks in locations as exotic as Taipei, Costa Rica, and Brooklyn...where she first met Lucius Von Wahnfried.

Lucius von Wahnfried grew up listening to Kraftwerk records at the wrong speed. It is believed that subliminal messages from these early listening sessions were the essential key to Lucius’ discovery that music was his destiny. His young ears heard the call, and he promptly retreated from society to study sitar with Indian maestro Ali Akbar Khan.

Lucius’ career first took off when he toured with Phish jam band, Deep Stench. They played parking lots all over America. But success wouldn’t last long for Lucius. His first tour was cut short by a near-fatal hacky sack injury. He suddenly developed an incurable phobia of tie-dye and hemp jewelry.

It was during this dark period that Lucius discovered dance music, and in 1998, he began DJing underground parties in the San Francisco Bay Area and beyond. His undeniable talent on the ones and twos eventually landed him coveted slots at illegal warehouse parties all over Brooklyn.

But Lucius was destined to become more than a DJ. His foray into building a free-energy machine out of magnets according to blueprints bought from some guy on 4chan set him on a whole new path. The energy machine never worked, but when he played it into the speakers, he inadvertently created his first techno track.

Lucius’ first single went platinum on the deep web. He then went on to dominate the Russian BitTorrent charts, proving that the Stench just can’t be stopped. Lucius continues to experiment in building his own gear and sometimes electrocutes himself on purpose.

Alchemical Disco is the union of these two base elements—by alchemy—to form Solid Gold.